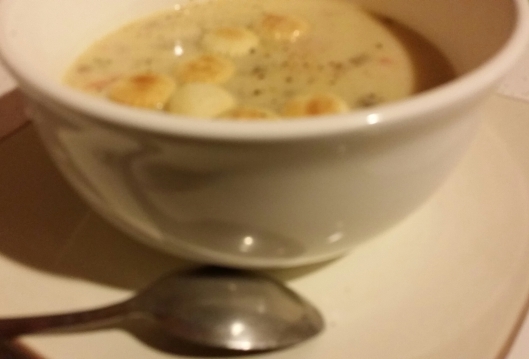 Buzzfeed featured Tasty’s New England Clam Chowder recipe and finally the enigma of that creamy, delicious blend was unraveled in a combination of meaty clams, creamy potatoes with a hint of smoky bacon that reminds me of the Atlantic Ocean. Back home in South Jersey, I went whale watching in Massachusetts on a school trip my freshman year of high school, the ship we sailed on served the freshest clam chowder I have ever experienced having access to only the best right out of the ocean. Though it’s well into March, the weather has turned bitterly cold and this chowder is just perfect for warding off the chill!

There was some controversy in the comment section on Buzzfeed, from real New Englanders, who were rightly offended on behalf of the memories of “real chowda”, not having carrots. This recipe is based on Tasty’s recipe with carrots but I have made several alterations. Please refer to the original for its version or a real New England Chowda chef.

For Awesome Saucery’s version you will need: 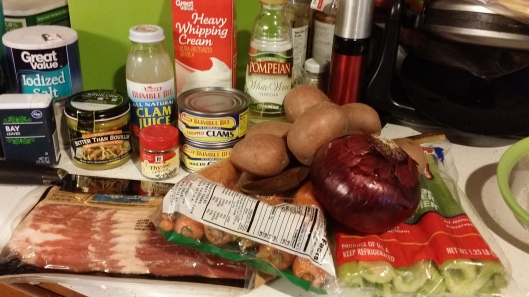 Most of the grocery haul required! Not bad. Lots of servings (8 to 12) and relatively inexpensive (under $20 depending upon where you shop)! #NordicDiet friendly!

Added a bit of olive oil to the pan to lessen the sticking but a frond will form on the bottom of the pan. No worries!

First sauté the bacon in the 2 tablespoons of butter until the edges begin to crisp.

Next add the miropoix and thyme plus some salt & pepper. Continue to sauté for 4 minutes until the veggies soften. Add white wine vinegar to bring up the layers of frond on the bottom of the pot. Add flour and cook for 1 minute to get rid of raw flour taste.

Reserve those clams for later or they will turn gummy and chewy instead of tender!

Add the juice from the drained clams, (set the minced clams aside), the bottle of clam juice, the water, chicken base, potatoes and bay leaf to stockpot. 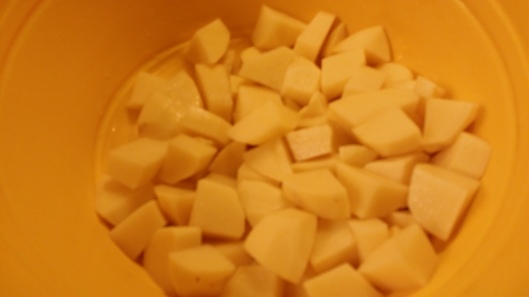 Add 5 to 6 peeled, chopped red potatoes to the pot carefully to avoid splash!

Add peeled, chopped potatoes. Bring to a boil, cover and lower heat to a simmer for 20 minutes. Stir every so often (between every 5 to 8 minutes) to prevent sticking. 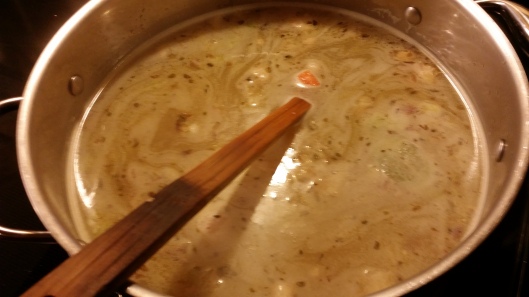 Stir up from the bottom to release the frond (or crust) on the bottom of the pot and help the chowder thicken!

After testing to see the potatoes are soft, add the reserved clams and cook for 2 minutes. Turn down the heat to add the cream.

Heat turned down to prevent clotting. Cream added, more fresh black pepper, cooking for 2 minutes at a simmer to just heat the clams!

Soup is done! Quick, delicious, easy and way better than anything you’ll find processed in a can!

This is a 6 quart stock pot full of #Yum right here!